Last week I began to make some comments on how our Anglican communion service explains the gospel so well, following a similar pattern to Two Ways to Live.  The first point is that God is our Creator, to whom we are absolutely accountable.  The next salient fact, which I will focus on today, is that […]

Late last week I heard news of the passing of Mrs Sheila Morrison in England.  If you have been a member of St Jude’s for more than thirty years, you may remember Sheila, the wife of Rev. Neil Morrison who ministered here for several months in 1988. Neil Morrison was the rector of the Church […]

Psalm 23 Devotion – A song for dark days   By Kat Cowell Main Bible passage: Psalm 23 Extra passages to read: Ezekiel 34:1-24; John 10:7-29 Generally speaking, I am not one of those people who can dazzle those around me with memorised song lyrics, movie lines or quotes from famous people. For whatever reason, words […]

For the next few weeks in this column, I’d like to make some comments on our Anglican communion service, and how beautifully it explains the gospel.  It follows a similar pattern to the well-known gospel outline Two Ways to Live. The first point, simple but profound, is that God is our Creator.  God is more than […]

In today’s gospel reading, we are reminded of Jesus’ famous saying, “The harvest is plentiful, but the workers are few.”  It is so often true, in many areas of life, isn’t it?  Whenever there is something good to be done – helping the sick and injured, teaching those without access to good education, getting alongside […]

After a funeral recently, I asked a lady if she was a member of a church. She replied that, while she was a nominal church member, she really felt more at home with the “Old Testament God”. As a result of this aversion to the New Testament, she wasn’t actually attending church. These remarks were, […]

Psalm 18 Devotion – A song for when we want to run away By Kat Cowell Main passage: Psalm 18 Extra passages: John 1:1-18; Ephesians 6:10-20 When we find ourselves backed into a corner, facing trouble of some kind, it is good to have an ally. Someone who can defend and protect us. Someone who […]

Today’s gospel reading, in which Jesus says to a man, “Your sins are forgiven”, reminds me of C.S. Lewis’ famous argument for why Jesus cannot be “just” a great moral teacher.  You might have heard of his “Liar, Lunatic, Lord” argument.  Lewis wrote, “A man who was merely a man and said the sort of […] 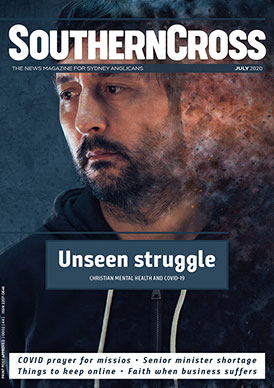 The July edition of the diocesan magazine is out now.  You can view it here.